What Types Of Batteries Are There? 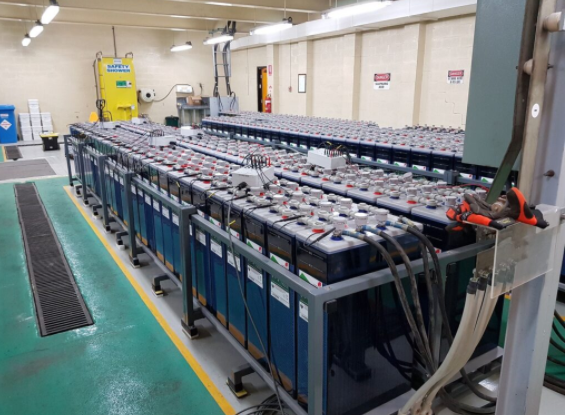 The concept of batteries that we normally handle can be defined as a “device formed by several cells capable of storing electrical energy for later use”, and as a term, it is applicable to any accumulator or set of several accumulators of electricity.

What are batteries used for?

Batteries are a source of DC voltage and are used to ensure the operation of critical electrical equipment or that do not have access to the electrical network. This makes them useful for a multitude of situations, some of the most common battery applications are:

What are batteries made of?

Basically, batteries are made up of cells, which in turn are made up of two electrodes (an anode and a cathode) made of different metals and immersed in an electrolyte solution (acid or alkaline) that will allow the chemical reactions that will release or store the Energy. Each of these cells, in their different compositions, has a capacity and by joining several cells, different battery capacities are achieved.

Are all battery the same?

No, not at all, we can find many types of batteries, and although all of them have the basic function of storing electricity to supply it when needed, due to their different compositions and internal configurations we can find battery much more suitable than others for according to what uses.

It is important to know which battery is suitable for the use that we are going to give it since otherwise we can waste the particular characteristics of the product or exhaust the useful life of our battery in a few days due to improper use, remember that even outside The battery is similar or even if they share general specifications such as voltage and amperage, they will not give you the expected result if you do not choose the correct type of battery.

No, not at all, we can find many types of batteries, and although all of them have the basic function of storing electricity to supply it when needed, due to their different compositions and internal configurations we can find battery much more suitable than others for according to what uses.

It is important to know which battery is suitable for the use that we are going to give it since otherwise we can waste the particular characteristics of the product or exhaust the useful life of our battery in a few days due to improper use, remember that even outside The battery is similar or even if they share general specifications such as voltage and amperage, they will not give you the expected result if you do not choose the correct type of battery.

What types of cycles are there?

How long do batteries last?

The answer to this question varies a lot and is directly related to the use that is given to it, its maintenance, recharge method, temperature, and other factors. Cases of the dead battery can be seen in just a few weeks due to severe overload effects, batteries damaged in less than a year even without being used, by being left in a hot garage without being charged, or battery that lasts less than half of the time. that they should due to improper use or charging. To maximize your battery life, the first thing to do is choose the right battery.

How do I know which battery is the right one?

Taking into account the use that is going to give it, and to make a general distinction, they could be separated into stationary batteries, cyclic batteries, and starter batteries:

What types of batteries are there?

According to its manufacture, VRLA is a type of lead-acid, and within these, the AGM since they are the batteries that you can buy in-store, to avoid confusion you can find several categories named for their main use, such as “batteries for UPS “(to use as a stationary battery) or” batteries for electric vehicles “(to use as a cyclic battery).

VRLA, what is that?

The point is that every battery generates gasification during its normal operation, and if this is abundant, the pressure is created inside, therefore, it is not appropriate to completely seal a battery, and therefore, VRLA batteries have rubber caps that seal each cell.

These plugs in case of excessive gassing will open releasing the internal pressure. That is, the caps for safety, regulate the eventual gas outlet. Because of this, AGMs, which carry these sealing caps, are also called Valvo Regulated Lead Acid (VRLA) batteries. With AGM, we can achieve all the advantages of GELs without acquiring any of their disadvantages.

This type of battery is so widespread because AGM VRLA battery offers high performance, making the value for money very good. In addition to this advantage, the sealed construction eliminates the need to fill the battery with water, making it suitable for a multitude of applications where other batteries could be a problem.

What is the difference between GEL and AGM batteries?

The 2 are a type of batteries called “dry”. Internally there is no electrolyte (acid) in a liquid state. That is, the electrolyte is immobilized in some way. During their normal operation, these sealed batteries do not emit gases to the outside, therefore there is no danger of corrosion in the vicinity of the battery. They receive one of the 2 definitions because technically there are two ways to immobilize the electrolyte:

What are the advantages of AGM Batteries compared to Gel Batteries?

What applications do AGM batteries have?

AGM batteries have various uses such as: Batteries for UPS, Emergency Lighting Equipment, Telephone Stations, Video-filming equipment, Child trolleys, mini-motorcycles, Electric Wheelchairs, Renewable Energy, Robotics, Car Golf, Medical Equipment, etc., and depending on their internal composition (anode and cathode materials, electrolyte composition, number of plates, etc.), some are more suitable than others for different applications, you can find different sections dedicated to each battery series available in our online store.

Is the battery charger important?

Of course, when recharging the batteries, the amount of current delivered by the charger must be taken care of, it must always be done according to the instructions of the battery manufacturer.

If the current is excessive, abundant gassing is generated inside the battery and this can cause expansion (“swelling” and deformation) of the case and the battery becomes unusable. If the charger does not function properly for your battery, it will rapidly degrade it and lose its capabilities.

It is generally recommended to start charging with a current range equivalent in value to 1/10 of the battery capacity. For example, if it is a 12 volt 7 Ah battery (as used in emergency lighting equipment or most UPS), it is recommended to start the recharge with a current of 0.7 amps (provided that the manufacturer does not indicate otherwise). Slower reload rates are more efficient.

A battery rated at 180Ah (amp-hours) in a 6 hour period can also be rated as 220Ah in a 20 hour period, and 260Ah in 48 hours. Much of this loss in efficiency is due to increased internal resistance at higher ampere ranges (internal resistance is not a constant) and is something like “the more you push.

Always using the correct charger and following the proper methods to charge batteries is one of the keys to improving their life. Never allow a battery to overcharge or get hot. If the battery becomes hot to the touch on the outside, immediately unplug the charger and allow the battery to cool before continuing.

What is the internal resistance of a battery?

Part (or most) of the energy losses when charging or discharging batteries is due to their internal resistance. This lost energy is actually dissipated and converted to heat, which explains why batteries get hot when they are being charged. The lower the internal resistance … the much better, the battery can be considered more efficient.

What battery categories do you have now for sale?

Here we are committed to helping you bank your energy. Batteries are an efficient solution to store long term power and ensure the security of your energy supply. As a commercial or industrial enterprise, it is often important to contain a backup of stored power to ensure that the core functions of your business remain operational. Will either install, repair, maintain or replace your battery units to assist you in combat business downtimes or catastrophic loss of data. Batteries are able to secure both fossil-based fuels and renewable energy provided by solar or other means.